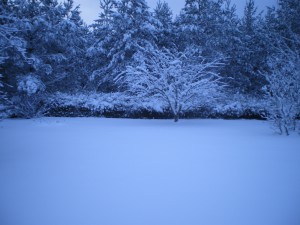 SURELY the morning moon, I thought,
Has bathed the hill in light
But, no; I see it is the snow
That, falling in the night,
Has made Yoshino white.

Little is known about this poet,  Sakanoue no Korenori but he is said to have lived some time in the tenth century. Yoshino is a mountain village in the Province of Yamato, famous for its cherry blossoms; at one time it contained the Imperial Summer Palace. In the illustration we see the poet looking across at the village on the hills all covered with snow.

All of the above English text is taken from:
http://www.sacred-texts.com/shi/hvj/hvj032.htm

If I may add a little here, it is said that the author Sakanoue Korenori was a government official and was moved to the province of Yamato when he wrote this verse. Yoshino is very cold in the winter and when he woke up early in the morning, he thought that the refection of the snow light was the moonlight he saw in Ariake (the Ariake sea is located in the warm southern island of Kyushu). Some scholars say that he took this idea from the famous Chinese poet Rihaku (李白). Rihaku writes in his famous 静夜思 (silent night thoughts) that he thought the reflection of the snow was frost.

Here is the Swedish translation by Shozo Matsushita and Per Erik Wahlund.