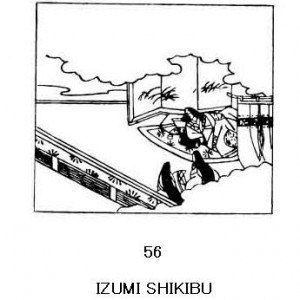 All of the above text was taken from the link
http://www.sacred-texts.com/shi/hvj/hvj057.htm

If I may add here, the female author Izumi Shikibu is said to have been a person who lived for love. Very passionate and broke the norms of that time. She married Izuminokami Tachibanano Michisada and together they had a girl named Koshikibunonaishi, author of verse no.60.  But during her marriage, she falls in love with the third son of the emperor of that time, Reizei tenno. The young man was said to have been very handsome but a playboy. His name was Danjonomiya tametaka shinno. Ofcourse, her husband Izuminokami Tachibanano Michisada did not accept this affair and divorced her. Her father threw her out of the family. Then her lover Danjonomiya tametaka shinno died. Devastated and mourning in her deepest sadness the younger brother of her dead lover approaches her. She ends up in a relationship with this prince as well but after 4 years, he also dies. But being who she was, she gets married again to Tangono Kamifujiwara Yasumasa. She was an extraoridinary attractive woman who wrote and expressed her feelings openly and directly in her poetry. This influenced the poets that came after her generation very strongly. 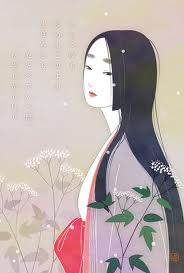 Here is the Swedish translation by Shozo Matsushita and Per Erik Wahlund.