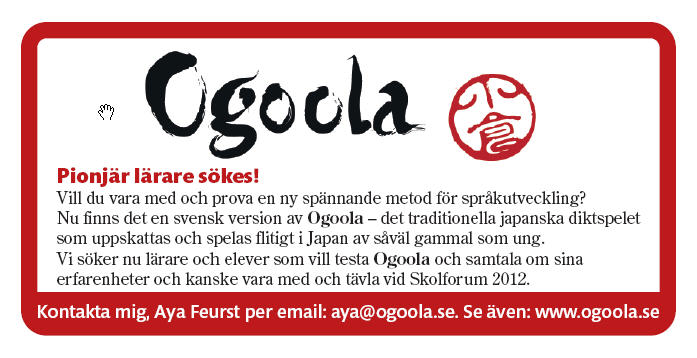 Gunnel Wallquist, treasure of LMS Sweden (language teachers association of Sweden) was kind enough to invite me to introduce the Ogoola poetry game in Västerås. 7 lovely female teachers appeared. Many of the teachers could teach more than one language which is just amazing for me, but it almost seemed normal here in Sweden.

The meeting started around 6:30 pm. I had a plan to introduce the original Japanese Ogura Hyakuninisshu karuta and the Swedish version, Ogoola diktspel and also the base of this game DIKT 1598-1939. I also wanted to recruit teachers to come to Skolforum 2012 with one or two of their students to participate in the Swedish Ogoola competition that we are organizing. However we ran out of time.

The most important thing was to have the teachers experience playing the game. That we managed. I wanted to have a short trial so I picked out only the even number cards to play but suddenly I noticed that the cards I organized for a short game were not correctly organized. So we lost time organizing that. I really need to organize this much better next time! On top of that, I did not know that some teachers came from cities further than 50 km away, so they had to leave earlier than I thought. That means that we barely had time to play the game once. Now I know that it’s best to ask everyone when they need to leave so I can plan better. It was my first time to give a presentation on Ogoola and in Swedish! And even though it was a good try, maybe I should have done it in English. However, everyone who came seemed to have enjoyed the time so maybe I will continue to give the presentations in Swedish. So it became that LMS Västerås was the Premiere try out of Ogoola!

It was really wonderful that teachers came to the meeting and really tried out the game. That is the most important part of this presentation. The participation and experience of the game. Now I would really appreciate it if some of the teachers that came that night would post their opinions on this blog! 🙂

I really hope to be able to visit more schools and teachers. The teachers are terribly busy because of the new grading system and plan that the government has made. A change in everything at once creates chaos and I could understand that many do not have the time and energy to try out new methods. However, I still would like to go on introducing the game. I could feel that we are experiencing culture. It’s about what we are living for. About love, passion, sorrow, pain, beauty of nature. The game is a door opener for both children and adults to get in contact with the beautiful words written by the great poets.

I really hope that I could meet teachers who would be interested in joining me as a pioneer to spread the Ogoola game! It would make me feel like every second and minute I invested in the making of Ogoola was really worth it.

I would like to use this space to give my thanks to all the teachers from LMS Västersås who came to play the Ogoola poetry game on monday, February 13th, 2012.